The Thomas Poole Library’s July edition for the The Old Gaol.

1546 – Robert Parsons was born to humble parents Henry and Christiana Parsons. In early childhood, he was sent to his eldest brother, who was in trade but had to return to his parents when his brother’s business failed. Showing a quick intelligence and a capacity for learning, the local parish priest advised the parents to give Parsons a trial at the Neighbouring.

School of Stoke Courcy (now known as Stogursey, a village 3 miles northeast of Nether Stowey) undertook to pay for his education.

1560 – Parsons was sent to the Free School at Taunton. From a letter written by another brother, it appears as if his schoolmaster was ‘very sharp and cruel’.

Parsons wrote to his father and said he was tired of being a scholar, but his mother would not hear of it and rode a horse seven miles to the school to threaten him that if he came home, she would tie him to a post and whip him! Parsons saw that there was nothing he could do, so he ‘fell to his book very heartily and became the best in the school’. His schoolmaster saw the change and wrote to Parsons father to encourage him to send Parsons to Oxford.

1564 – At the age of eighteen, Parsons was sent to Oxford. He first went to St. Mary’s Hall, and after two years of studying Logic, he entered Balliol College and graduated with a Batchelor of Arts. In 1568, after completing his degrees with distinction, he became a Tutor and a Fellow with responsibility for supervising the Junior Members of the College.

1574 – As a Fellow, Parsons clashed with the Master, Adam Squire and the academic Roman Catholic priest Christopher Bagshaw, so on 13th February 1574, he was forced to resign. Through discussion, and with Father William Good, an English Jesuit, he was encouraged by pupillage, and he became a Jesuit priest at St Paul’s, Rome on 3rd July 1575.

From the time he converted to the faith of his grandparents, the single aim of Parsons was the restoration of England, by persuasion or force, to the Roman church.

1610 – Parsons died in Rome after a short illness on 15th April 1610. He was buried in the church of the English College next to his mentor and friend, the English Cardinal William Allen.

The image of Robert Parsons is © The Trustees of the British Museum. 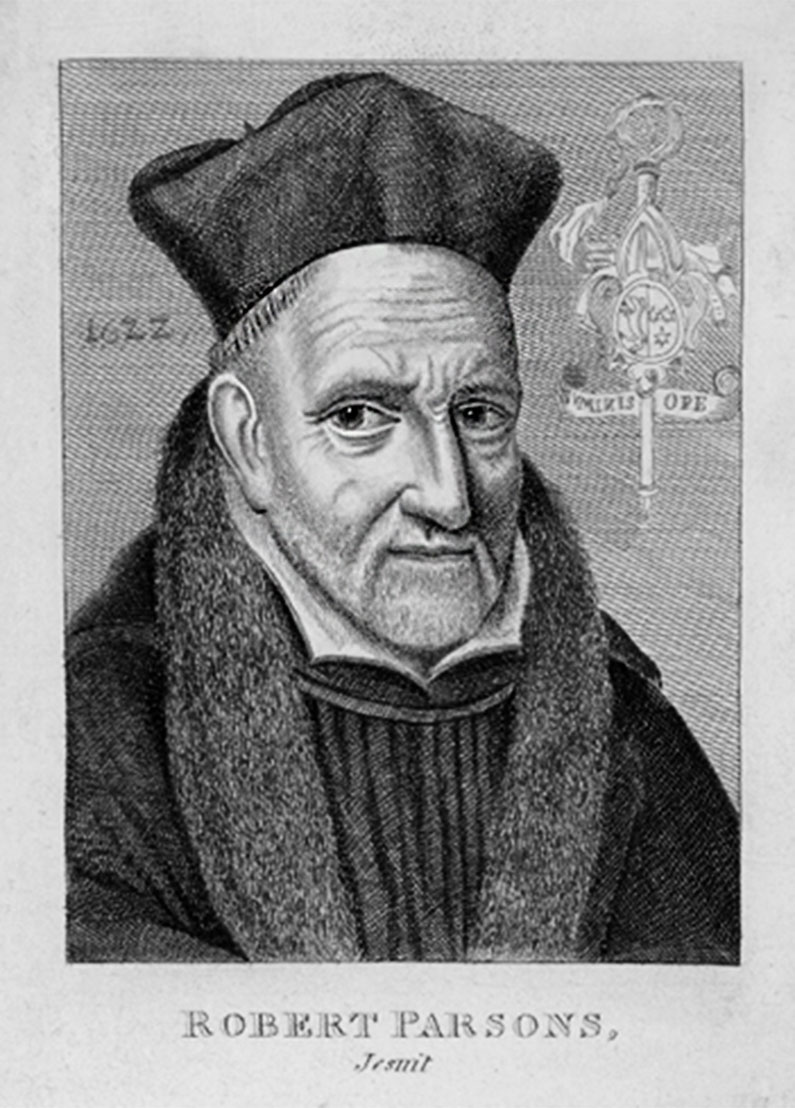